Goal scoring with Smile Soccer Stars and the Albion Foundation 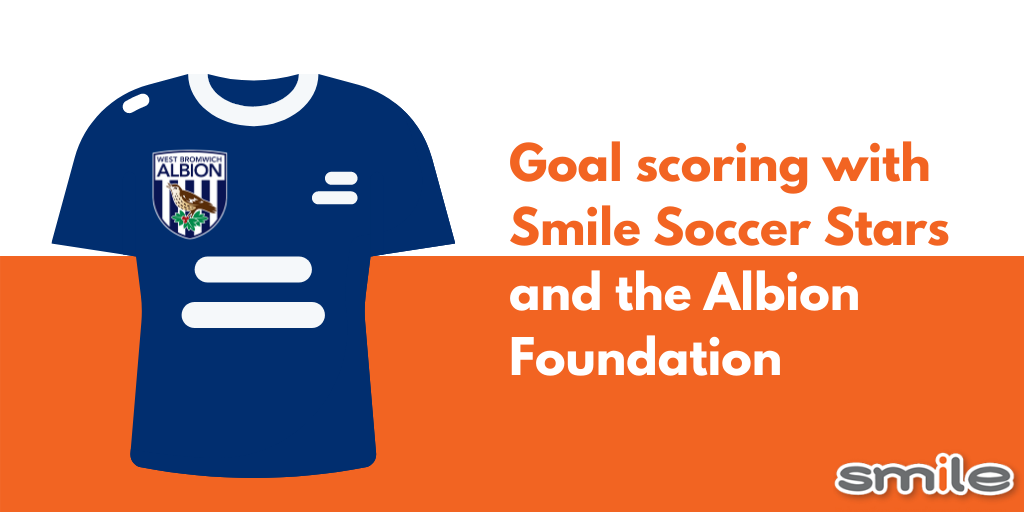 For a while now, we have been working closely with West Bromwich Albion Foundation to bring sport to children who might not otherwise get the opportunity. Since running our first event in 2019, Smile Soccer Stars has grown into something more than we could have ever imagined - even the pandemic couldn’t stop it!

CSR is something that is very important to Smile Education and as a team, we do lots throughout the year to raise money for charity. In 2019, we actually won APSCo’s CSR Initiative of the Year Award as a result. The event is the brainchild of our Executive Associate Director, Kash, who was looking for new ways to give back and add value to the local community and schools that we support. Knowing how important sports are to schools, we started reaching out to a few different well-known sports teams including West Bromwich Albion and well as they say the rest is history!

We chose to partner with the West Bromwich Albion Foundation as we felt that their values aligned and were similar to ours. Ultimately, however, it was their goal to deliver 10 million hours and make a difference to 100,000 lives, in the next 10 years that really struck a chord with us. We felt that this was something we wanted to be a part of, something we wanted to help them achieve.

We’ve since had the pleasure of working with the charity on more than one occasion and despite our last event taking place on line it was in no way any less of a success. The virtual version, nicknamed Smile Soccer Stars: The Reboot, is our most recent event and took place in December 2020. It was the first time we had ever held the event online and we were thrilled with the response with almost 2000 children from schools across Birmingham signed up to take part.

Running the event online provided many more pupils, who wouldn’t have gotten the opportunity otherwise with a chance to take part. Running the event in school allowed more girls to take part and gave those with special educational needs and those from ethnic minority backgrounds the chance to participate too. Focusing on more than just football, the students were tasked with catching, keep ups and even an obstacle run.

Feedback for the events, as always, has been highly positive. M. Jones, PE Lead and DSL at Welsh House Farm Community School had this to say when asked about the virtual event:

“The competition was brilliant, the children really enjoyed it and it was ideal in the current circumstances.”

But it’s not just the schools and teachers who enjoyed the event, the children did too which makes it even more special. After taking part in the event, one year 6 pupil comment:

“We did lots of different activities which gave us knowledge about healthy bodies. I learnt that doing healthy activities benefits you as you get stronger physically and mentally.”

For our Executive Associate Director, Kash, this is what really makes the event stand out. In fact, Smile Soccer Stars is one of the things that Kash is most proud of and one of his proudest achievements while working at Smile.

While Kash may be the driving force behind the scenes, it is the Foundation’s Richard and Andy who make the event come to life on the day. Working with the Foundation has been a pleasure and thanks to their support each and every tournament has been seamless.

Of course, without the schools and the students, Smile Soccer Stars would be nothing. A huge part of the reason we run these events is to ensure that all children know that there is enjoyment in sport - not just ones who are good at sport. Seeing the children playing and having fun on the day for us is what makes it.

One of the biggest successes however is that as a result of taking part in Smile Soccer Stars a number of students have been scouted to play for West Bromwich Football Albion’s Academy. Something which for some of the children may have been very unlikely to happen without these events.

If you’d like to know more about our Smile Soccer Stars events or want to get involved, then please get in touch. Details about our next tournament are coming very soon so, be sure to keep your eyes on the ball and watch this space.